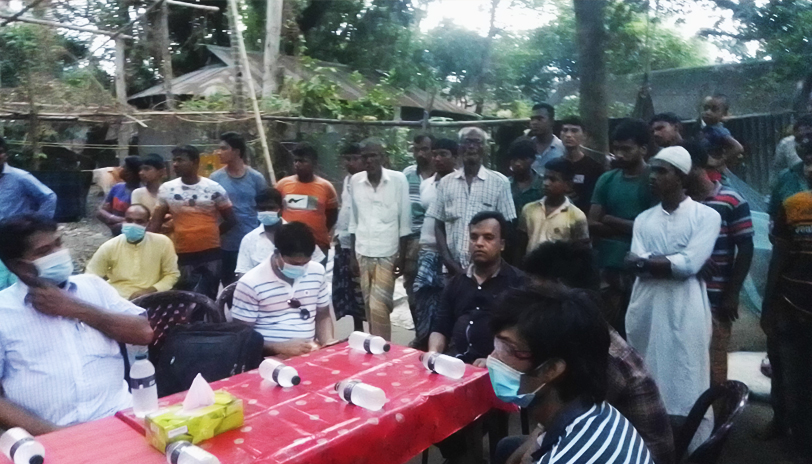 Thousands of religious businessmen, including the Islamic zealots attacked house of Hindu victim on 31 August,20 son of Shyamal Haldar of Khanurbari village in Gobindasi union of Bhunapur in Tangail district and the HSC of Birshreshtha Nur Mohammad Rifles School and College, have been accused of insulting Islam in a messenger chat group. They looted Shravan Haldar’s house, looted 10 gold ornaments, furniture, utensils, necessary documents of his land, and the amount of damage was 15 lakh rupees. The incident took place in front of the local police, which came to DBC News.

A visit to the site by the Bangladesh Minority Watch BDMW Central Committee found that the so-called Touhidi mob had carried out many more acts of violence than I had feared. The police officer in charge and the investigating officer of the police were with us during the investigation.
When asked about this by the police officer and the investigating officer, he told us, “Thousands of people are outraged by the attack on religious sentiments in Islam. It was not possible for the little Police force to stop this outrage.” The family is safe – we made no mistake in trying for safety , “the district police superintendent told us.” This guy put us in danger by posting on Facebook like this – you stop the bloggers. We will take the last step when the situation calms down. “Shravan Haldar — We took him into custody and saved his life. “

We ,team of BDMW, had seen Shravan Haldar’s mother sitting like a stone – she can neither cry nor laugh . She and eyewitnesses said that such incidents did not happen even during the liberation war in 1971. Acquaintances from nearby also testified that lot of villagers took part in the looting. Still these Hindu families are living in terror. The surrounding Hindu families could not find a way to hide in the horrific violence – they were running around helplessly for safety – but the police were silent.

When asked who the neutral people are, they say that in the name of religious sentiment, they have looted and vandalized in a planned manner under the leadership of the imam of the local mosque.

The most surprising thing is that even when the local administration found that the situation was favorable, the extra security measures were still not tightened ? A week after the incident, no legal action has been taken against the attackers.

On behalf of Bangladesh Minority Watch, I strongly condemn the above communal attacks on the total helpless Hindus.. I demand the immediate and unconditional release of Shravan Haldar Hindu detainee and exemplary legal action against the conspirators and attackers of religious sentiments.

Is My Religion Stifling Freedom of Speech?